For the fifth consecutive time, FAKRO and A10 new European architecture organized a competition for young architects. Following previous editions’ explorations of innovative possibilities for lofts and ateliers, this year’s brief is dedicated to a smart design that explores the feasible inclusion of new technologies and circular flows (materials, food, work, energy, water, etc.). In the proposal, the use of FAKRO products is mandatory. The design should be functional, energy-efficient, full of light, user-friendly, and fully blend in with its surroundings.

As Maarten Gielen, jury member and co-founder of Rotor, has stated previously, ‘Energy efficiency alone is no longer enough. It's not about the evolution of triple- to quintuple-double glazing. I'm very curious as to how the topics of sustainability, recyclability, circular society, and such live on through young architects from around the world. I also find it important to emphasize that the discussion on sustainability should be enriched with moral and political views on what sustainability is, actually.’ The other jury members, Sabina Sujew (FAKRO) and Indira van ‘t Klooster (A10) heartily consented and set to the task of assessing all 57 entries, which came from all over the world. Besides Europe, designs reached us from Mexico, Indonesia, Iran, the United States, Cameroon, Thailand and Belarus, to name a few.

After a first round of getting acquainted with all proposals, the jury was pleased to see so many dedicated designs that generally were highly realistic and well-documented. But given the design brief, we also expected to see an awareness of sustainable design issues and social topics. In the first round we therefore discarded all plans that were poorly documented, not specifically related to the design brief, not innovative or unrealistic in terms of technological possibilities and cost-effectiveness. Entries that focused entirely on wellness, artists’ retreats in vulnerable natural settings, or blobs unrelated to their local surroundings were also laid aside. Of these, the jury regrets to say, there were quite a few.

In the second round, we judged the remaining 22 plans. In these entries, several topics were being discussed, ranging from the need for high-quality small housing in China, possibilities for transformation of grotto-dwellings in Italy, the shortage in locations for recharging whatever runs on batteries nowadays (phones, computers, cars), housing for the homeless, sociopolitical circumstances in Iran, circular systems, self-sustainable units, and social housing, as well as some interesting technological innovations. After thorough examination of the proposals, we favoured those plans with the most thought-out technical solutions, clever cost-effectiveness, conceptual strength, and social relevance. We arrived at the final seven submissions, which were then awarded a prize or special mention.

James Furzer draws attention to the situation of rough sleepers in London, which is rapidly increasing: the city’s 6500 rough sleepers a year are more likely to have social, physical and/or mental problems, as well as a high mortality rate. They are insulted and harassed, and their chances of becominge a victim of violence or theft are alarmingly high. This project aims to offer a safe urban retreat in hanging ‘pods’. By making clever use of blind walls, these pods offer a protected place to sleep, which make them an asset on both an urban and social level. Even though some practical questions remain concerning, for example, ownership, resistance to vandalism, and maintenance, the jury highly values the assertion that companies like FAKRO can contribute to solving social problems by donating their products to such goals. The careful and well thought-out construction plans are ready for execution. Last but not least, the adaptation of the FAKRO products is technically feasible.

This ‘Fashion House’ is planned on the corner of a busy street in Nova Huta (Kraków). It intends to offer cultural space to a neighbourhood built during the communist period. Besides the plan’s sensitivity towards the needs of the neighbourhood, the jury values the attention that is given to light by giving standard FAKRO products new uses. The top roof window Type F and DXF are combined with a light tunnel, which – by adding mirrors, LED lighting, and a light-disperser – create beautiful prisms that might leave FAKRO wondering what other new sensations of light are possible when collaborating with companies outside the window manufacturing business. In the meantime, this smart and technically sound proposal can be applied quite easily in all types of interior situations.

Self-sustainable micro-homes are becoming increasingly relevant for festivals, off-the-grid living, permaculture technologies, and showrooms. In this high performance container, everything one could need in order to join the circular society is present: oven, rainwater collection, beehive, greenhouse, thermal mass. Meanwhile, localized microclimates contribute to temperature moderation, while well-isolated windows allow for optimized control of cross ventilation and thermal comfort. The jury appreciates the way Kerechanin has made detailed connections between all necessary required items and necessities, and fit it all in a box that seems to offer a very comfortable residence. 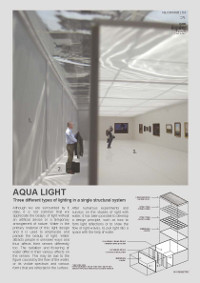 Although 100 per cent waterproof flat roof windows would prove to be a major technical challenge when water weighs down on them in such an amount, the jury was inspired by the poetic play with light and water that would make a wonderful pavilion or small building. 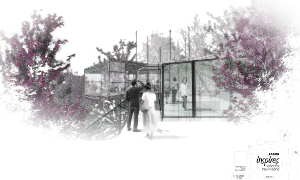 This charming plan is shaped by the debate surrounding self-sustaining communities. The restaurant grows its own food and adjusts to all seasons. Lovely details, beautiful setting. 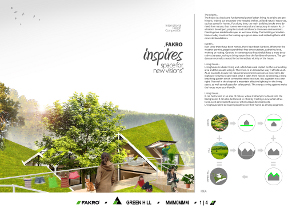 Green roofs are an excellent insulator. This stylistic mixture of a traditional African village and 1970s-era housing offers interesting perspectives for multiple dwellings in both urban and rural settings. 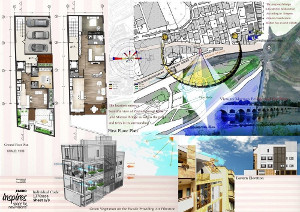 The simple act of putting in a roof window can be connected to complex socio-political issues. This entry raises the matter of Vitamin D deficiency for Iranian women who are refrained from exposing their skin to sunlight.