New Vison of the loft 1

In April 2011, FAKRO in cooperation with the European architectural magazine A10, launched its third international competition for architects entitled ‘The New Vision of the Loft’.

Design your innovative, creative and artistic vision of the loft using any of FAKRO products, including, obligatory, a minimum of two FDY-V U3 Duet proSky roof windows and one FGH-V P2 Gallery roof windows.

Such was the scale of the competition that FAKRO received entries from around the word with a truly diverse array of architects participating. This ranged from those running their own companies and architectural practises to larger international agencies and even students at colleges and universities. Entrants even included visionaries, town planners, interior designers and artists – who, together with architects, wanted to share their vision with FAKRO and prove that our products are the perfect choice for bringing any architectural concept to life.

The competition itself was set out in third one of its kind, with the first being entitled the ‘FAKRO International Design Competition’, which was co-organized by the prestigious Dutch Fontys Academy and directed mainly to urbanism.

The main prize in the first competition held was the unique opportunity to take part in an architect workshops at the Stadslab European Design Laboratory, which works closely with FAKRO. This was run by Marc Glaudemans, architect and lecturer in Fontys Academy of Architecture and Urbanism in Tillburg (Netherlands). The competition projects themselves were judged by Didier Rebois – architect and architecture critic, the Secretary General of Europan Europe in Paris and Pieter Oosterhout – architect, director of the architectural agency Pieter Oosterhout Architects from Beuningen in Netherlands.

Following this, a conference was held in Muszyna (Southern Poland) between 12-15 October. This was a chance for participants to meet both FAKRO and A10 Magazine. In addition, there was the opportunity to visit FAKRO’s headquarters and get a better understanding of the wide range of products on offer by observing first hand their production process, as well as receiving an informative presentation and lecture. 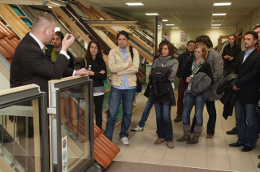 Additionally, a discussion panel was held which allowed entrants to the competition to present their projects and ideas to a committee consisting of sector representatives, international architectural associations and representatives of the international magazines for architects. Here projects were discussed on all levels, even philosophical and social ones.

The conference was not just a discussion panel and presentation of FAKRO as a company. It was also a chance for professionals from around the world to get a better understanding of Poland and what it has to offer.

As part of this, Architects were invited to try regional dishes and listen to folk music. They were also taken to see the architecture of Southern Poland, visiting regional tourist spots, as well as the world-famous Salt Mine in Wieliczka and the country’s oldest and arguably most beautiful city, Cracow. Architects staying in the conference and training centre at the Activa Hotel in Muszyna also enjoyed the many leisure activities available which included quadbikes, archery range, bowling, billiard and sauna.

In addition to all this, additional sites of interest were included which complemented the talks about architecture, especially with regards to using FAKRO products. These demonstrated how a room could receive better illumination, optimisation of ventilation and improved energy-efficiency with regards to creating better ecology and safety standard.

Here once again, FAKRO demonstrated that they could compete with the world’s largest companies, while also being the ideal choice for those seeking new and innovative solutions in their projects.

The conference turned out to be a huge success both for the organizers (FAKRO and A10) and participants. So much so, that it has become the cornerstone for future event and has raised many questions and topics, which will surely be discussed at next year's conference.